I’ve heard that phrase and given that response in countless occasions during the past few days. Another colleague of mine said that my immersion should be likened to more of a drowning rather than a “get your toes wet” kind of ordeal. Right when I arrived in Germany I realized the grandeur of this adventure. I literally hadn’t given the trip any thought, I was trying to not get excited. If I wasn’t excited, I couldn’t be disappointed, that was my train of thought.

Now that I’m here, wow.. As I was saying, the moment I stepped off the airplane I realized that I was on my own. I had a train ticket in my hand that was entirely written in German, that I had only looked at ONCE. Poor planning on my part I suppose. But, nevertheless, I still managed to make it to my first train. I arrived there thinking that I would just grab a seat on a train like in America. This was when I realized something, I wasn’t in America. Just as all my cultural classes had taught me, things were quite different. I looked over my ticket again briefly and realized that printed on the ticket were a couple of numbers, one signified the cart and the other the seat. This was a tremendous find on my part, 30 seconds before the train arrived. I had diverted a lot of awkward conversation that ultimately could have caused me to miss the train.

After I boarded the first train, I was a world traveller. I had successfully departed a plane and boarded on a train. Boy did I feel accomplished, … or shall I say relieved. The train brought me to a main train station in Frankfurt where I was able to board another train that would ultimately take me to Kassel. The train ride was my first moment where I could relax. I didn’t have to worry about getting enough sleep on the plane, or finding my bags in time to board the train. I was able to absorb the scenery and the dynamic culture of Germany. After an hour of sight-seeing, I was on to the next stop of my adventure, the Taxi ride to my house.

The taxi driver was standing in the building, outside the platform, holding an iPad 2 with Phoenix Contact on it. I looked around, decided that he was here for me and proceeded towards him. He greeted me with, “Guten tag Herr Reichert, wie gehts?” At that moment, I had my first opportunity to use the little language I knew. I answered modestly, “ Ich bin sehr gut!” Speaking German in a class room setting is far easier than speaking to a native German. Most of the time, the person you’re speaking to has a similarly limited vocabulary and you are almost able to know what they will respond. However, in the real world, there are no limits. Germans have vocabularies with the sky being their limit, just as people do all around the world. In a classroom, you are almost oblivious to it. There are no curveballs, there is merely the next regularly accepted response.

The train ride from Kassel to Leopoldstal was thrilling. It was my first time on the Autobahn and my first time in a car that was going over 100mphs … legally. The signage (Zaechen) in Germany is far different from in America, which makes me a little hesitant to get behind the wheel over here. I will only have access to a car on the weekend, but I’m going to make sure I understand everything about German traffic (Verkehr) before I get on the road. It is experiences like the taxi ride that make learning fun, I was able to pick up a couple of words in an environment that was tied to a memory. It allowed me the opportunity to learn a word … for good.

When I arrived at my house in Leopoldstal it was just like the pictures I had seen on the website; it was breathtaking. The area is located in the country and there are numerous running trails placed closely to my house. The site is ideal for a person working in a city that needs the chance to retreat to a home for relaxation. 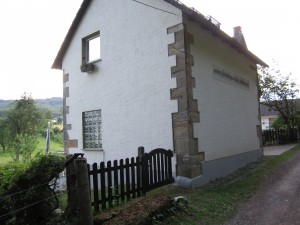 In my next post, I’ll be sure to go in-depth to how my first few days were and what type of experiences I encountered. I’ll post a few photos on here with the bulk of them being posted on Facebook.